I’ve never told a dating story like this one. It’s not about a disastrous but hilarious encounter, nor is it a tale of another “really great guy” who had everything I was looking for except that indefinable chemistry. Buckle up, my friends, because this is a love story.

After a year of online dating all of you know I was spent. Just the thought of my profile on a dating website made me nauseous as I was certain the process wasn’t for me.

BUT, there is something about time and distance that dulls the insanity of that forced year and a few months ago I decided to dabble in the practice again. There are many new options—apps, niche sites, etc., and the beauty in discovering all those new choices is that I also have the choice to stay on or get myself off when the inevitable burnout is reached.

Ahh, the luxury of being a normal online dater.

After only a week I’d gone on two dates and had two more scheduled. One of those dates was of the boondoggle variety you’ve come to expect. Maybe I’ll write about it at some point. The other was a good date—but he was only in the city for a short visit and returned to the UK a few days after we met. My two upcoming dates were with what I figured were nice guys but let’s just say they weren’t exactly wowing me with riveting pre-date conversations. Then I received this message from Will:

“You are beautiful, but I have to ask, current pics?”

“Naw, high school, but my friends say I look just the same.”

What transpired was the most entertaining back and forth I’ve every experienced. The instant simpatico we had was, well, stunning. One of us would toss up the precursor so the other could deliver the outrageous punch line.

It was a dance of comedic timing and I’d met my match—in fact I’m sure he was funnier. So clever that I would often scream with laughter over his retorts. He told me he laughed out loud several times a day when recalling the things I’d written.

Yes, I went on those two dates scheduled prior to meeting Will, but those men—as nice as they were—didn’t stand a chance. It was all I could do to get through dinner without checking my phone for his magic texts.

Will (50) lived in Westchester, had one child in college and was in the process of divorcing. He described the situation as “amicable” and himself as one with “no baggage.” I know, ridiculous and impossible, but because our texting tête-à-tête was so over the top, I was happy for it to continue knowing that eventually I’d learn the realistic version of his circumstances.

AND (full disclosure), I wasn’t ready for our jousting to be muddied by the inevitable encumbrances that living a half-century includes. I was also reticent to exchange too many details, as I would then have to share that I write about dating. That tends to make men nervous. Wonder why?

Of course, I dreaded giving him my last name, too.

But it seems all good free flow must end and Will eventually turned the conversation in the career direction and I had to disclose what I do. Um, kind of. He asked about what I’d written and I vaguely responded by telling him I wrote articles and blogged about a variety of different subjects: aging, being single over fifty, that sort of thing. He seemed satisfied but just as I relaxed and pulled my head from the guillotine, Will shared his last name and asked me mine.

I told him I didn’t want to share my last name—went on a text ramble about my desire for him to get to know me before reading the stuff I’d written—really blathered on and on. A couple of seconds later he replied with: 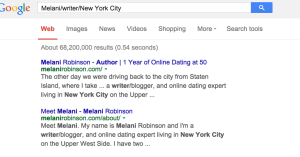 Seems all he had to do was Google Melani/Writer/New York City and with the unique spelling of my first name, www.melanirobinson.com popped up along with: Author/1 Year of Online Dating at 50. He asked if I was on the dating site for writing material. I assured him I was not. I also asked that he not read anything I’d written but instead get to know me. Then I waited for his response.

I asked if he was going to reply and he texted that he was “processing” all the information he’d just learned. He also mentioned that it was “surreal.” I told him I understood and I would wait to hear from him once he had finished processing.

Then I felt sick. Really awful. All night long. He never responded and I came to the conclusion that he was no longer interested. I didn’t blame him and my biggest fear of digital dating became a reality. In the real world when I meet a man I control my narrative and the fact that I wrote a blog about a year of online dating doesn’t sound ominous. Imagine, though, if you’re on a website and you learn that the person you’re corresponding with writes about online dating. Completely different game. I actually can’t think of a worse scenario—unless I was a stripper. 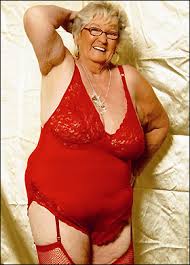 What? Are you thinking I’m delusional with the stripper comparison? Wow, I can almost see your smirk from here. OKKKKK, snarky reader, I’ll clarify. Unless I was a stripper working the assisted-living circuit. Sheesh, happy now?

By the next morning I’d still not heard from Will. At that point we had been communicating numerous times a day so I knew it was bad. Feeling down because I was beginning to believe he might be the one I’d been hoping to meet for so long, I decided to delete my profile from the dating site. Nobody else could compare and even if I met someone else, I would still have to go through the explanation of my work.

BUT, before I deleted my profile I sent Will one final message. I explained that the thing I feared most had happened and he obviously didn’t want to continue to communicate. I gave him my phone number and told him if he changed his mind he could call. I also explained that I would leave my profile up for a few hours to be sure he got the message but after that, it would be deleted. 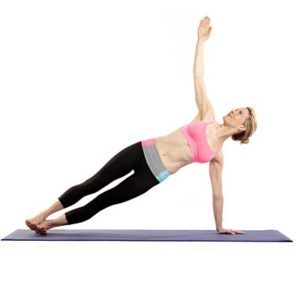 Chose a blonde so you might think it’s me.

Then I went to yoga.

And thought of nothing but him–even while holding two lengthy, torturous plank poses—regular AND side.

My yogi is a complete asshole.

Once finished with class I checked my phone and faced the truth. I would never hear from Will again. I deleted my profile and headed to Trader Joe’s for groceries.

On the walk I got a call…